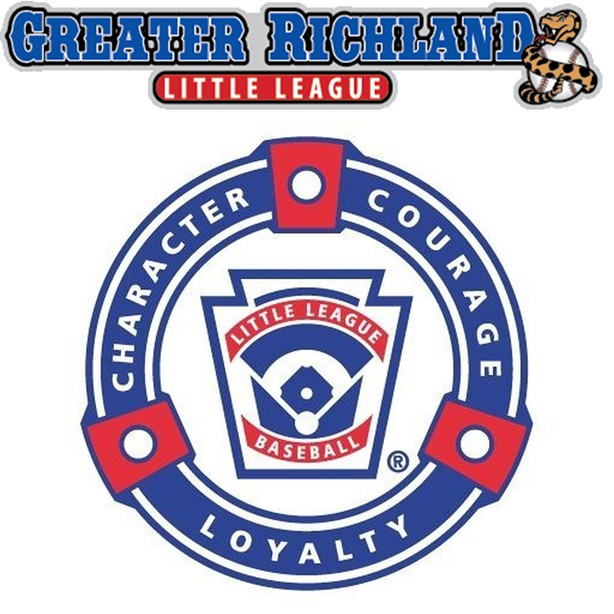 Parents of players in Intermediate, Major’s division and AAA division:

At the conclusion of the Greater Richland Little League regular season in early June, four league all-star teams 13U (intermediate), 12U (majors), 11U, and 10U begin their journey through the Little League All-Star Tournament.  The tournament consists of a district tournament against other Little League teams from the Tri-Cities and the Yakima valley regions.  The district winner at each age level then will participate in a state championship tournament.  For the majors (12U) division, winning the state tournament results in an invitation to a regional tournament and with success, eventually the Little League World Series.  For 2021, the 13U, 11U, and 10U divisions will progress to a state championship but will not include a regional or national tournament.

All-stars is an honor, a privilege, and a commitment. Please read through this entire letter and submit the attached All-Star Application if you are interested in having your child considered for placement on one of the Greater Richland Little League All-Star teams.

Saturday, May 15, 2021 Signed All-Star commitment form deadline (emailed to  president@grll.org)
Saturday, May 15, 2021 Managers and Coaches notify President of All Star interest via email: Which team, and position; Manager (on the ballot) or assistant coach
Monday, May 17, 2021 Majors division player voting on 12U, 11U, and 10U ballots (after games) Tuesday, May 18, 2021 Intermediate division player voting on 13U (after games)
Saturday, May 22, 2021Tryout for 10U All Star Team 5 pm Bombing Range
June 1, 2021 All-Star teams selections
Prior to Districts Deadline for Payment of Parent All-Star Fee

Those players selected to an All Star Team will be required to provide an Original Birth Certificate, and 3 proofs of residency showing their residence in the GRLL boundaries between February 1 2020 and February 1, 2021. If a player has previously played on an All Star team their paper work is valid and does not need to be reproduced. Alternatively, a player can show that they either go to school inside the GRLL boundaries, or lived inside the GRLL boundaries when they began playing baseball with GRLL, and have been registered to play each season since then (did not break service). GRLL does not allow players to play on GRLL All-Star teams while also participating on other league All-Star teams.

There is a financial expense for participation on the summer District All-Star teams. The player participation fee to GRLL will be approximately $75 (depending on Team Roster size) and will cover costs of the District 12 Tournament fee, insurance, 1 warm-up tournament entry fee, T-shirt Jersey and hat. Final costs will be determined prior to the team selection. Also please note that GRLL will NOT be covering costs of out-of-town lodging, travel or expenses if your player’s team plays out of town. Scholarships are available to help cover participation fees.

Practice begins immediately upon announcement of the teams around June 1 and continues as long as a team is playing. Teams will practice up to 6 days per week (days and times set by the manager) before game play starts and on most off-days after games start. Practice duration is typically 1 1⁄2 to 2 hours. Tournament play begins around June 25th and can run as far as the end of July (10U, 11U, and 13Uteams) or mid-to-late August (Little League Majors) depending on the team’s success. Practices and games may be held in the late afternoon or evening on weekdays and at any time on weekends. Games are not always played locally and may be played increasingly further away should the team advance to subsequent rounds. The format for each round is double elimination. If you have planned family vacations, etc., during the time frame described and do not have flexibility in your schedule, then you may choose to decline this invitation to participate in All- Star post-season play.

As previously stated, being selected to an All-Star team is an honor. Teams will be filled with very talented players, several who may play the same position. Players/parents need to understand that players may have a very different role than the role the player is accustomed to during the regular season. The coaching staff will determine the role/position that the player will fulfill to best suit the needs of the team.

For those interested, you may download the 2021 GRLL All-Star form using the link below. The completed form MUST be e-mailed to president@grll.org (aka Dan Evans) no later than May 15th, 2021.